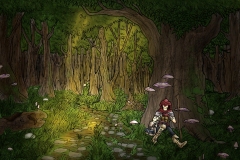 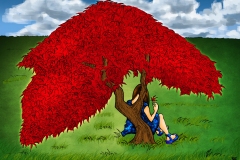 ◄ 1 2
Digital Art: The College Years. I REALLY tried to up my game while going to college when it came to coloring my artwork digitally. I focused on more realistic hair and shading. I STILL struggled to pull away from bright bold colors and my style remained very much manga/anime influenced, but by this time I had come to accept that was my style and embraced it.

One of the big projects I did was create fantasy characters of all my roommates in one big fantasy poster style. Other drawings I did were of me meeting my first girlfriends or just random characters that appeared to me in my head (like the rat prince and his rag tag group of buddies including a robot).

I tried branching out a little bit as well by drawing D&D characters in a Chibi style and trying to draw a picture from a photograph (the japanese maple picture). I also did my first few attempts at speedpainting (no or little lineart) which I don’t LOVE but I thought was interesting.